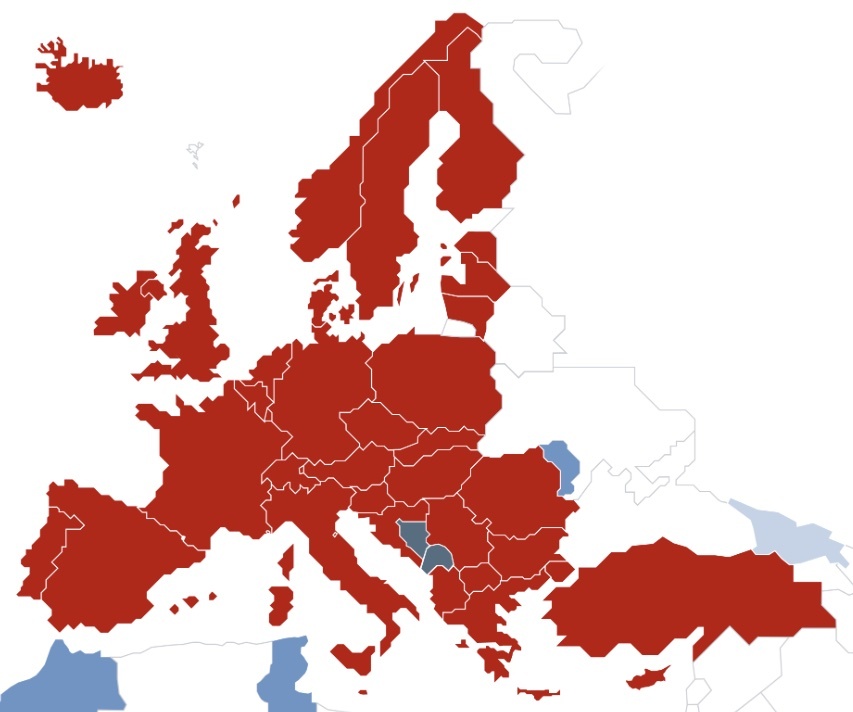 In addition, yearly renewal fees need to be paid for each of the chosen countries, and considering that the renewal fees in all of the EPC contracting states are set to progressively increase with the age of the patent, maintaining an EP patent throughout the EPC or the EU territories is an expensive endeavour (the graphs below represent a snapshot based on official renewal fees and currency exchange rates of June 2022): 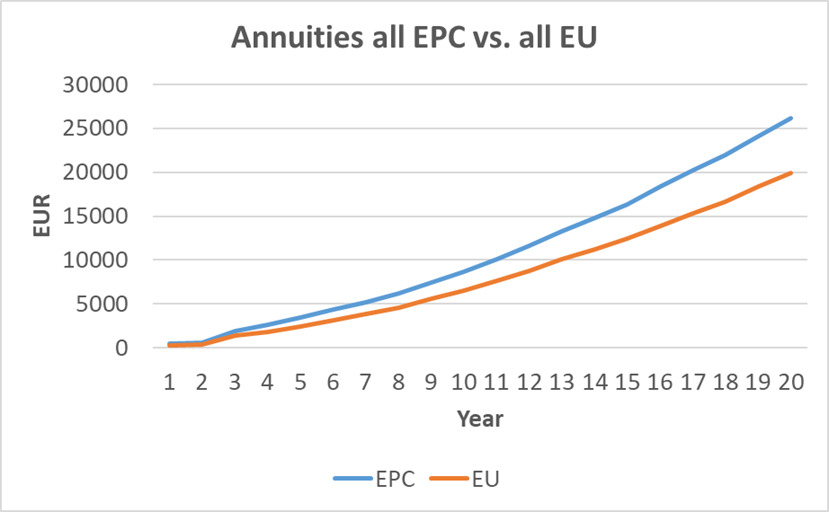 Finally, infringement and validity of EP patents classically validated is litigated before national courts of the EPC states. This necessitates the initiation of parallel court proceedings in several countries when infringement of a patent is to be stopped or a patent is to be revoked in a meaningful portion of Europe’s territory. The cost of assembling and coordinating multinational legal teams in the context of parallel multilingual proceedings is substantial, and the risk of inconsistent judgments rendered by the various courts is real.

Against this backdrop, and desiring to establish a more uniform and cost-efficient patent system in Europe, twenty five of the 27 EU countries[1] have initiated enhanced cooperation to bring about the Unitary Patent system, in order to provide for a European Patent with unitary effect (Unitary Patent) across their territories. The key characteristic of the Unitary Patent will be that it will afford uniform patent protection throughout the territory of the participating Member States for which the unitary effect has been registered. The Unitary Patent will only require a single translation of the patent (during a transitional period of 6 years) and a single yearly renewal fee to be paid. All post-grant administration, including the registration of the unitary effect and the payment of the renewal fee, will be handled centrally by the EPO.
[1] Austria, Belgium, Bulgaria, Cyprus, Czech Republic, Denmark, Estonia, Finland, France, Germany, Greece, Hungary, Ireland, Italy, Latvia, Lithuania, Luxembourg, Malta, the Netherlands, Poland, Portugal, Romania, Slovakia, Slovenia, Sweden.

While 25 EU countries have participated in the enhanced cooperation, the availability of a unitary designation for a given country is conditional on that country’s signature and ratification of the Unified Patent Court Agreement (UPCA), which establishes the Unified Patent Court (UPC). Currently, only 17 EU countries[2] have ratified the UPCA, and therefore the Unitary Patent will only be available for these 17 countries when the system enters into force on April 1, 2023 (as currently expected). The number of participating EU countries is expected to grow in the coming years, although Spain, Croatia and Poland are already known to remain outside of the system in the foreseeable future.
[2] Austria, Belgium, Bulgaria, Denmark, Estonia, Finland, France, Germany, Italy, Latvia, Lithuania, Luxembourg, Malta, the Netherlands, Portugal, Slovenia and Sweden.

Accordingly, at the start of the operation of the UPC system the ‘UPC space’ is expected to look as follows:

Still, with the heavy weights of Germany, France and Italy among the participants from day one, the 17-strong ‘UP space’ will account, respectively, for almost 70% and 80% of the EU’s population and gross domestic product (GDP), and for almost 50% and 60% of the population and GDP of all 39 EPC countries combined. This can increase even further once the remaining UPCA signatories ratify the agreement. Accordingly, the territorial impact and economic value of a Unitary patent will be considerable.

Start of the Unitary Patent System

The UPC Preparatory team has recently published the implementation roadmap that depicts the key activities and milestones of the UPC in the coming months.

According to the roadmap (which is still subject to changes if certain key deliverables and milestones are not met) the deposit of the UPCA ratification instrument by Germany is expected to occur in December triggering the Sunrise period of 3 months (starting on January 1st, 2023) followed by the entry into force of the UPCA on April 1st, 2023, with the Court opening its doors and starting to receive cases as from that date.

Requesting an EU Unitary Patent will be easy

The registration of unitary effect for a granted EP patent in the 17 participating Member States will be handled by the EPO upon the patent holder’s written request (using EPO’s Form UP 7000). The request must be filed no later than one month after the date of publication of the mention of the grant in the European Patent Bulletin. To be eligible for registration as a Unitary Patent, the European patent must have been granted with the same set of claims in respect of all the 25 participating Member States.

Separate validations will of course remain necessary for countries not covered by the unitary effect. This will include those participating Member States that have signed but not yet ratified the UPC agreement on the date of registration of the unitary effect for the EP patent.  This will further include those EU states which have not participated in the enhanced cooperation (ES, HR) or have not signed the UPCA (PL). And finally, this will include all non-EU EPC states.

Eventually, no translations of the EP patent will be required to allow the registration of unitary effect. However, during a transitional period of six years (which may be extended up to a maximum of 12 years), the patent proprietor will have to file one full translation of the European patent specification, namely: into English if the language of the proceedings before the EPO was French or German, or, into any other official language of an EU Member State if the language of the proceedings was English. The translation must be filed together with the request for unitary effect. It is for information only and has no legal effect.

EPO's transitional measures to facilitate the introduction of the UP system

With a view to supporting users in an early uptake of the Unitary Patent, the EPO has decided to introduce two transitional measures as from January 1, 2023 applicable to European patent applications having reached the final phase of the grant procedure (after dispatching of Rule 71(3) EPC). The first transitional measure will enable applicants to file early requests for unitary effect already before the start of the Unitary Patent system. The second transitional measure will provide the possibility for the applicant to request a delay in issuing the decision to grant a European patent after despatch of a communication under Rule 71(3) EPC by the Office and before approving the text intended for grant. This will make a European patent eligible for Unitary Patent protection that would otherwise have been granted before the start of the new system and will avoid that applicants miss opportunities to obtain a Unitary Patent in the period before the start of the UP system.

Choice of UP remains optional

Importantly, the choice for a Unitary Patent will be entirely optional, and patent holders may instead use the existing system of classic validations in the individual EPC states. Moreover, as said above, such classic validation will remain necessary for any EU countries not participating in the Unitary Patent system and for all non-EU EPC states. It is however not possible to request the unitary effect and also classically validate an EP patent in a country covered by the unitary effect, nor to retroactively convert granted European patents having been classically validated in the participating EU countries into a Unitary Patent or vice versa.

Costs for a Unitary Patent will be lower

The pre-grant costs for filing, prosecuting and maintaining a European patent application at the EPO will continue to apply. On the other hand, the Unitary Patent system aims to significantly reduce the post-grant costs for maintaining patent protection in the states covered by the system, compared to the existing situation of individual validations and per-country renewal fees. Hence, there will be no official fee for filing a request for unitary effect (only a formality fee). As mentioned above, only a single translation of the patent specification will be necessary, and in situations where the patentee already has an EU-language translation of the patent, this can lead to no additional cost. Importantly, the Unitary Patent will be maintained by the payment of a single annual renewal fee directly to the EPO. This will be highly beneficial for patent proprietors as they will no longer need to pay national renewal fees to multiple patent offices applying different legal requirements - in particular concerning rates, time periods, payment methods and representation. A 15% reduction in renewal fees will be available to patent proprietors who file a statement on a licence of right with the EPO.

The UP renewal fees have been set to approximate the sum of renewal fees in about 4 individual states, and are as follows: 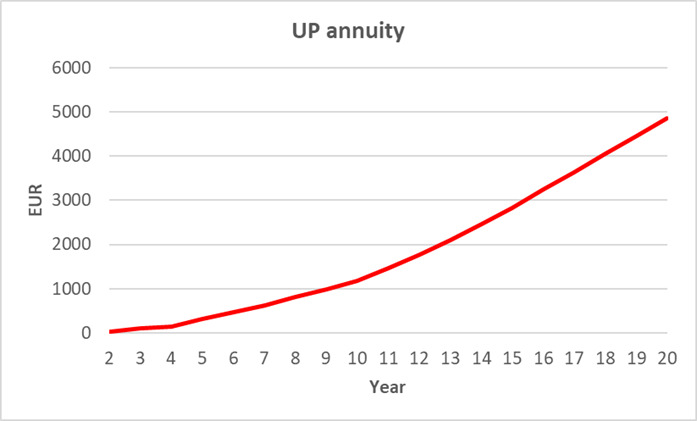 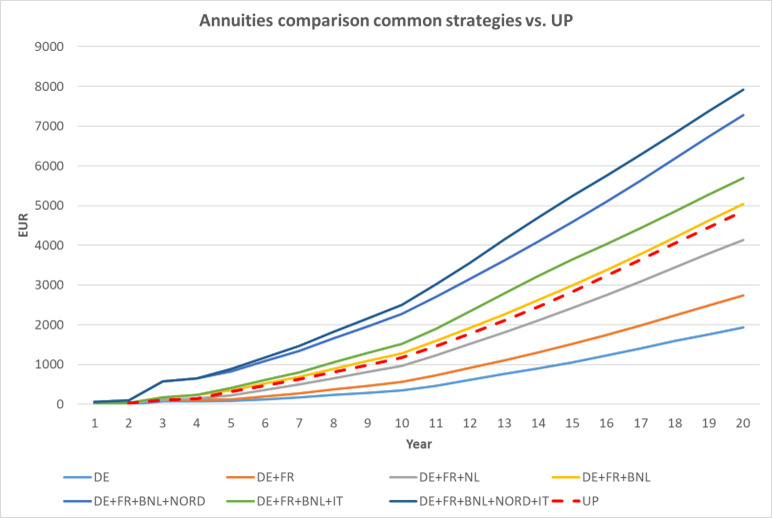 Availability of one register

The EPO will provide a new Register for Unitary Patent Protection that will include legal status information relating to Unitary Patents, e.g. on licensing, transfer, limitation, revocation and lapse. Transfers and licences can be registered centrally at the EPO under a single legal regime, instead of through multiple parallel registrations in national patent registers on a country-by-country basis.

While the analysis will always be case-specific, certain advantages and disadvantages that may influence your decision can be envisaged.

The above explanations are for information purposes only and must not be taken as a definitive statement of the law or practice. Please also check out our general guidance under the seperate tab here or send an email to info@dcp-ip.com.